Turning off the main street, the shepherds could see that the light fell over a portion of the inn. Upon entering the courtyard of the inn, they were surprised that the light was directly over the stable.

They looked at one another in amazement.

“Can the Child be in there?” asked Daniel incredulously.

“In a stable?” Jed protested. “This surely can’t be the place.”

“It doesn’t seem right,” agreed Ezra, “but the angel said we would find the Child in a manger.”

Although the inn itself was dark and deserted, light could be seen coming through a crack where the stable door had been left ajar. They walked cautiously toward it. They could see nothing through the crack, so they pushed the door slightly open. The light from the star lit up the inside in soft, gentle rays and illuminated a young woman kneeling beside a manger and a man sitting next to her. They knocked on the doorpost and Joseph stood up.

“We have come to worship a Child,” explained Ezra.

“Angels revealed His birth to us tonight,” Daniel added.

“Tell us, is this where we can find the Messiah we have all been waiting for?” asked Jed.

Joseph and Mary exchanged a knowing glance. “God has revealed this to you,” Joseph said as he gestured toward the manger. “He is here.”

The shepherds walked slowly over to where Mary and the baby were. She extended a welcoming smile to them as she uncovered the baby slightly so they could see His face. As soon as the shepherds looked upon the face of the sleeping child in the manger, each one of them fell to his knees. It was more than bowing out of reverence, which they had every intention of doing, but in His presence now they could not stand even if they had wanted to.

“This Child is God,” whispered Jed in breathless awe and wonder. “He has come to save us out of our hopelessness.”

“He is the promised King who will lead us out of darkness,” said Ezra, his face aglow in the light reflected from the Child.

“He is our Lord,” Daniel proclaimed. “Our Hope forevermore.”

Mary exchanged another knowing glance with Joseph. She had wondered if only she and Joseph could sense the Child’s holiness, but as she looked at the rough men prostrate on the ground, she knew these simple shepherds sensed the glory of God upon the Child, too.

The shepherds stayed bowed before the Child, their earlier complaints far from their minds, their dissatisfaction with life no longer in their memory. They were in the presence of God. They knew it. And they needed nothing more.

Lord, just as the shepherds discovered in the stable, there is nothing more precious than being in Your presence. I long to dwell in Your presence daily so that I, like them, can reflect Your glory. In Jesus’ name, I pray. Amen. 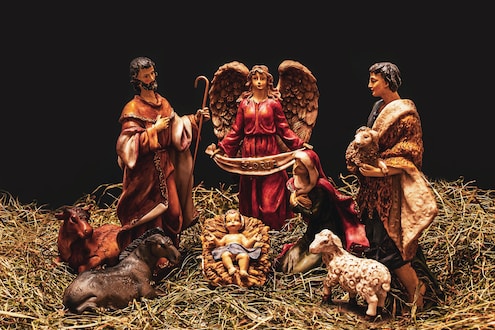